Rory McIlroy’s ascension to golf’s throne will have to wait. America’s Hunter Mahan saw to that with a 2 and 1 victory in the final of the World Golf Championships-Accenture Match Play Championship on Feb. 26. 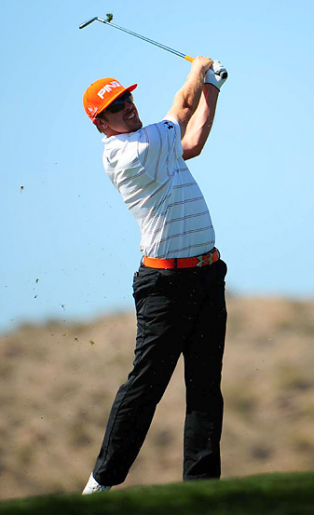 After current world No. 1 Luke Donald lost to Ernie Els in the opening round of the 64-man event, the door was open for McIlroy or Lee Westwood – ranked Nos. 2 and 3, respectively, entering the week – to claim the top spot. Fittingly, McIlroy and Westwood met in the semifinal round, with the young Northern Irishman beating his English elder 3 and 1.

That positioned McIlroy to earn the No. 1 ranking by beating Mahan, who defeated countryman Mark Wilson to reach the final match. Mahan proved too hot to handle in the Arizona sun, however, while McIlroy couldn’t feed off his triumph over Westwood. All square through five holes, Mahan forged a 4 up lead after 10 as McIlroy struggled. McIlroy cut the lead to 2 up with birdies on 11 and 14, but would get no closer.

The victory was Mahan’s fourth as a pro and his second in the WGC series; his most recent win came at the 2010 WGC-Bridgestone Invitational. Mahan entered the Match Play as the No. 6 seed in the Ben Hogan Bracket with a 10/1 shot at winning.

McIlroy, seeded first in the Gary Player Bracket, started the week as a 3/1 favorite while Westwood went off at 5/1. Tiger Woods (7/2) won his opening match, but fell to Nick Watney in round two.

At 20/1, Wilson carried the longest odds of the final four. He finished third by defeating Westwood, 1 up, in the consolation match.

Despite the hubbub surrounding the McIlroy-Westwood bout, the week belonged to Mahan. The 29-year-old led the field in birdies (35), playing beautifully from tee to green while holing miles of putts with a new Ping putter.

He also played the final with a small chip on his shoulder. “Deep down, you wanted to postpone that crowning of the No. 1 player in the world for Rory,” said Mahan, who nonetheless believes McIlroy will “be No. 1 eventually.”

For his part, McIlroy admitted his morning joust with Westwood may have left him drained. “No disrespect to the other guys in the semifinals,” he said, “but… to me it was like my final in a way.”

Mahan earned $1.4 million and jumped to No. 9 in the world ranking. He also marked himself as a solid pick in this year’s major championships, beginning with the Masters in April. Mahan is currently listed at 40/1 by Ladbrokes.

The PGA Tour crosses the country for this week’s star-studded Honda Classic in Florida. Tiger Woods (10/1), who lives nearby, is playing the event for the first time. He’s joined by McIlroy (7/1) and Westwood (12/1) in the field.

No European Tour event is scheduled for this week, with the WGC-Cadillac Championship, also in Florida, serving as the next official tourney.