He didn’t make it look easy, but England’s Lee Slattery closed out all competitors to take the Bankia Madrid Masters at El Encin Golf Hotel. 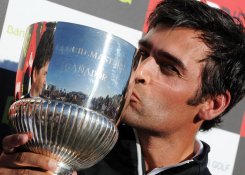 Slattery’s two-shot, 54-hole lead vanished quickly on Sunday; bogeys on two of his first five holes opened the door for Cesar Monasterio and Lorenzo Gagli. Slattery steadied himself around the turn, however, coaxing birdies from holes 11, 13, 14 and 15 to charge three ahead.

But seeking his first European Tour victory, Slattery made a mess of the par-5 18th. His second shot found a bunker, and his third splashed into a water hazard to bring triple-bogey into play.

Slattery’s chip and two-putt four double-bogey sealed a hard-fought win on 15-under par. “I’ve never shaken so much in my life,” Slattery admitted. “The belief I’ve got now after winning is tremendous and I want to win more.”

Slattery became the 10th different English golfer to win this year and the eighth first-time champion. It’s a far cry from his days working in a clothing store and modeling for Galvin Green. The hard-luck Slattery lost his Tour card in 2007, falling just €77 short.

This week the European Tour heads for the Portugal Masters, where headliners include Martin Kaymer, Thomas Bjorn and Alvaro Quiros.