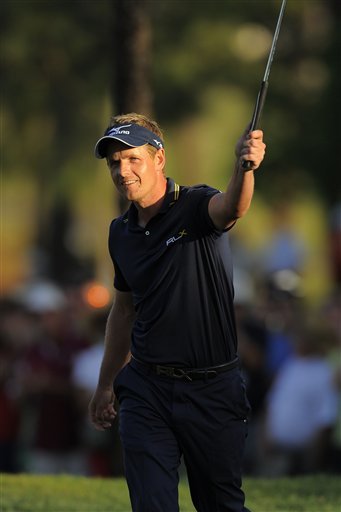 Clearly not content to let wunderkind Rory McIlroy go unchallenged as the world’s No. 1 golfer, Luke Donald reclaimed his crown with a playoff victory in the Transitions Championship. Donald defeated Jim Furyk, Robert Garrigus and Sang Moon-Bae with a birdie on the first hole of sudden death, ending McIlroy’s two-week run at the top.

Donald reached the playoff with a final-round 66, tying the others on -13 for the week. A 7-iron to 6 feet set up the winning putt, which Donald calmly rolled home for his fifth victory in his last 31 starts worldwide.

The oddsmakers certainly weren’t surprised by Donald’s win; he went off as the favorite on 10/1. Justin Rose, who took the WGC-Cadillac Championship the week prior, tied for 29th after entering on 14/1.

Having been overshadowed by McIlroy’s rise, Donald clearly enjoyed the moment at Innisbrook Resort near Tampa, Florida. “I don’t think many people thought I could do that all over again this year,” Donald said of a 2011 season when he was the top money winner in both the U.S. and Europe. “Hopefully I can prove them wrong.”

While Donald outlasted the pack, it was Ernie Els’ meltdown that paved the way. Els led on -14 through 15 holes, then missed a 4-foot birdie putt on the 16th. A bogey-bogey finish, including another missed 4-footer at the 18th, sealed his fate.

Donald, who earned $990,000, will sit out this week’s PGA Tour stop, the Arnold Palmer Invitational at Bay Hill. Tiger Woods is expected to resume playing after withdrawing from the WGC-Cadillac in the final round, when his Achilles tendon flared up.