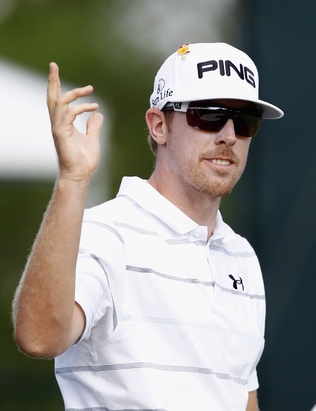 Hunter Mahan didn’t wait long to back up his WGC-Accenture Match Play victory with another big win. Mahan walked away with the Shell Houston Open title on the strength of a final-round 71 – and a bit of help from third-round leader Louis Oosthuizen – just six weeks after his WGC breakthrough.

Sunday dawned with Oosthuizen, the 2010 Open champion, as the Houston favorite. The South African began the day two shots clear of the field, but unraveled with double-bogeys on holes 5 and 8 followed by another pair of bogeys. Oosthuizen righted the ship with three birdies down the stretch, but it wasn’t enough to catch Mahan.

In fact, Carl Pettersson proved Mahan’s toughest competitor. The pair were tied on 16-under through nine holes, but a Pettersson bogey on No. 10 handed Mahan a lead he refused to relinquish. Pettersson finished second alone, with Oosthuizen third after a 75.

Not so for Mahan, who appears to be coming into his own at age 29. “It shows me what I can do,” he said of the win and his lofty new ranking, “shows me what I’m capable of.”