It figured that when Tiger Woods finally won another golf tournament, he’d do it in dominant fashion. And so it was at the Arnold Palmer Invitational, where Woods walked away with a five-shot victory – his first since September 2009. 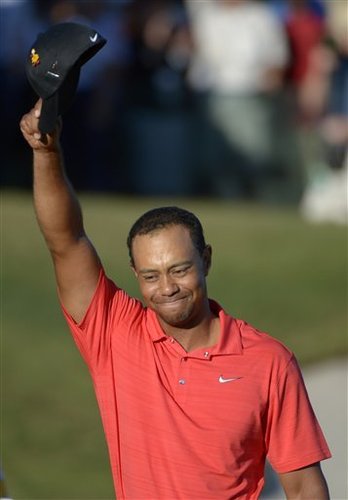 Driving and putting better than he has in years while displaying trademark iron accuracy, Woods easily outpaced runner-up Graeme McDowell with a four-round total of 13-under par. No surprise that Woods’ latest breakthrough came at Orlando’s Bay Hill Club, where he’s now won seven times. The victory was Woods 72nd as a pro on the PGA Tour.

While Woods beat a strong field, the tourney was notably missing the world’s top five players, including Luke Donald and Rory McIlroy. Woods entered as the favorite and left all competitors in his dust.

Woods claimed the 54-hole lead with rounds of 69-65-71 and never relinquished it on Sunday. McDowell’s first-hole double-bogey gave Woods a cushion on the tough, wind-swept course, and Woods rarely faltered coming home. His closing 70 was one of the day’s best scores.

Most importantly for Woods, the win closed a chapter in which he battled personal issues, injuries and swing changes instigated by new coach Sean Foley. “I’ve been close for a number of tournaments now,” he said, “and it was just a matter of staying the course and staying patient, keeping working on fine-tuning what we’re doing. And here we are.”

Woods will not be on hand for this week’s Shell Houston Open, where Mickelson is set to defend his title in the last event before the Masters.