In just his third event as a pro, England’s Tom Lewis won the Portugal Masters with a sensational final-round 65. The 20-year-old finished 21-under par and two clear of Rafael Cabrera-Bello. 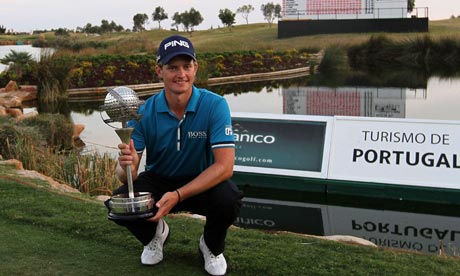 Lewis began the final round four shots behind Cabrera-Bello at Oceanico Victoria Golf Course, and was staring up at six players with just seven holes to play. Faltering by the leaders, including Peter Hanson, Christian Nilsson and Felipe Aguilar, opened the door for Lewis, who blitzed the back nine with five birdies in a six-hole run.

Despite cashing €416,000, Lewis said, “I’ve not thought about the money – I was thinking about winning.”

“I’m nowhere near the player I want to be,” insisted Lewis, who can now skip Qualifying School thanks to a two-year exemption. “I’ll put this behind me at the end of the year and start fresh next year.”

The European Tour stops in Valencia, Spain, this week for the Castello Masters.