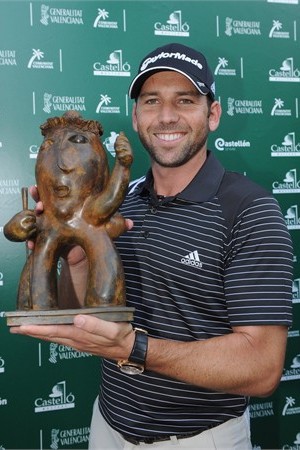 It may not have been a major, or even a prominent European Tour event, but Sergio Garcia will take his victory since 2009. The Spaniard was simply brilliant in winning the Castello Masters by 11 shots, dedicating the triumph to the late Seve Ballesteros.

Garcia began the final round eight clear of the field at Club del Campo Mediterraneo in Valencia, a course on which he won the club championship at the tender age of 12. Now 31, Garcia blistered the rain-softened layout with a 63, his second of the week, to finish -27.

Countryman Gonzalo Fernandez-Castano was a distant second on -16, with Sweden’s Alex Noren and Scotland’s Richie Ramsay tying third on 15-under.

“It’s hard to say that you expect to fire like I did,” said Garcia, fresh off a four-week break from tournament golf, “but I was feeling good and I’ve been improving all year.”

Indeed, Garcia has enjoyed a resurgence after spending 2010 in a funk. Garcia posted three top-12 finishes in majors and nearly won the BMW International Open in June, losing in a playoff to Pablo Larrazabal.

Afterward, Garcia thanked family, friends and sponsors, saying, “They have stuck with me and believed in me and I’m happy to be able to pay them back with this victory.”

The Andalucia Masters at Valderrama is next on the European Tour schedule. Garcia heads a solid field expected to include Graeme McDowell, Martin Kaymer, Thomas Bjorn and other stars.