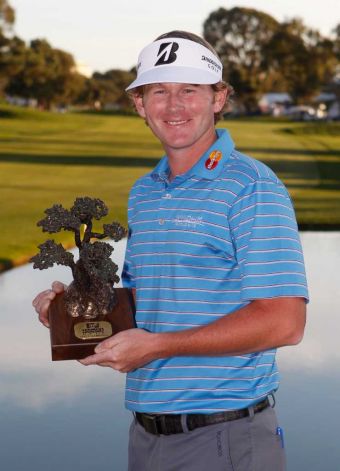 Kyle Stanley’s epic 18th-hole meltdown at the Farmers Insurance Open landed him in a playoff with Brandt Snedeker, who benefited from another huge break to claim victory in sudden death.

Stanley, a second-year pro from Washington state, nursed a seven-shot lead early in the fourth round and led by four as he played the par-5 finisher. After a solid drive and lay-up, he wedged onto the green, only to watch the ball spin back off the putting surface and into a pond. Stanley’s next attempt – his fifth shot after a penalty – found safety, but he three-putted from 45 feet for a triple-bogey eight.

Snedeker joined Stanley in the playoff after posting a final-round 67 for a 16-under total. Stanley got a measure of revenge with a birdie on No. 18, the first extra hole. Snedeker matched his four, however, and the pair proceeded to the par-3 16th. While Stanley hit the green, Snedeker sent a 5-iron too far. Rather than plunging into a nearby canyon, however, the ball bounced off a TV tower. Snedeker made par from there, then won when Stanley three-putted yet again.

“You never want to see anybody go through that,” Snedeker said of Stanley’s travails. “But he’s an unbelievably talented player, and the sky’s the limit for him.”

Snedeker earned $1,080,000 for the victory, the third of his career. John Rollins took solo third, two shots out of the playoff, while Bill Haas and Cameron Tringale tied fourth.

The Tour heads to Arizona for this week’s Waste Management Phoenix Open, where Mark Wilson is the defending champ.