Bill Haas seems to have a flair for the dramatic finish. His 45-foot birdie putt in a playoff punctuated an epic finale at the Northern Trust Open, sending Phil Mickelson and Keegan Bradley to defeat. 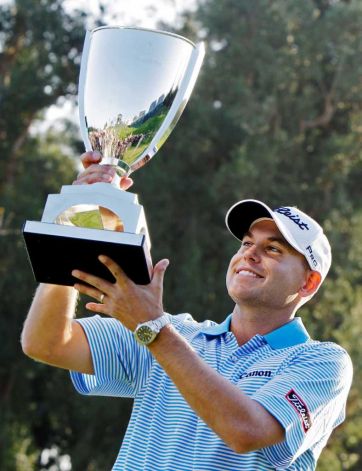 Haas, who won the 2011 Tour Championship thanks to an amazing shot from a greenside pond, drained the Northern Trust winner on the second hole of sudden death at fabled Riviera CC in Los Angeles, Calif.. The victory was Haas’ fourth on the PGA Tour and earned him $1.188 million.

Haas also made a fair chunk of change for those who bet him to win. He went off at 40/1, same as Bradley. Mickelson, fresh off a resounding victory at Pebble Beach, entered as the favorite at 9/1 odds.

The tourney seemed to be Haas’ alone when he finished on 7-under par; Mickelson and Bradley each trailed by a stroke with the difficult 18th to play. But Mickelson holed a 25-foot birdie putt, with the attending roar shaking all of LA. Bradley followed by calmly pouring in a 12-foot birdie of his own.

The trio parred 18 to start sudden death before Haas’ heroics ended it on the tiny, par-4 10th.

The PGA and European tours converge in Arizona this week for the WGC-Accenture Match Play Championship, pitting the top 64 players in head-to-head play. Mickelson is skipping the event, leaving favorite status to Rory McIlroy (11/1), Tiger Woods (13/1), Luke Donald (15/1) and Lee Westwood (16/1). (Odds according to SkyBet.)