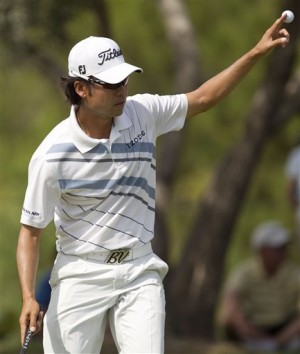 Na entered the final round tied with Nick Watney on 17-under par, then used a late birdie binge to pull away for a two-shot win. Na drew ahead with a 3 on the par-4 15th, matched Watney’s birdie on No. 16, then put it away with a 42-foot bomb on the 17th hole.

“I’m just very excited about my first win,” Na said. “It wasn’t easy. Nick was coming right behind me. It looked like any time he was going to make a move, and I tried the best that I could to stay one step ahead of him. I think the putt on 17 basically sealed the deal for me.”

Na seized control with five birdies on the front nine Sunday; slowly but surely, Watney chipped into the lead. Watney’s birdie on 13 paired with Na’s bogey on 14 made it all level with four holes to go, but Na stepped up in the end to finish -22.

Tommy Gainey and Paul Goydos tied for third on -18.

The PGA Tour heads farther west this week for the Frys.com Open in San Martin, Calif. Tiger Woods will make a rare fall appearance as he plays for the first time since missing the cut at the PGA Championship in August.