When all is said and done, Justin Rose’s victory may prove the least memorable occurrence from the 2012 WGC-Cadillac Championship. 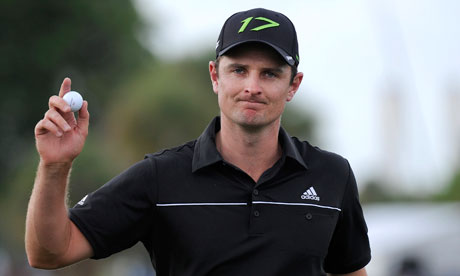 Of course, Rose would beg to differ. The 31-year-old Englishman captured perhaps the biggest win of his career, a one-shot triumph over Bubba Watson. But even Rose was surprised that a final-round 70 and 16-under-par total were good enough, considering the scoring onslaught of the first three days.

An even bigger story on Sunday was Tiger Woods’ pullout after his tee shot on the 12th hole. Woods, who changed shoes at the turn and winced noticeably after his final swing, issued a statement saying his left Achilles was the culprit. The tendon, which Woods injured during last year’s Masters, tightened up during his pre-round warmup and, Woods said, “felt progressively worse throughout the day.”

Woods’ status for upcoming events, including the Masters (April 5-8), was unclear as of Monday morning. Despite the uncertainty, oddsmaker Ladbrokes continued to list Woods at 6/1 to win his fifth green jacket.

Overshadowed or not, Rose basked in the victory, his fourth on the PGA Tour and first in a World Golf Championships event. Rose was coming off a fifth-place tie at the Honda Classic and entered the WGC-Cadillac listed at 50/1 odds. Rory McIlroy, the Honda winner and freshly crowned World No. 1, was a 6/1 choice with Woods (13/2), Phil Mickelson (12/1) and Lee Westwood (14/1) next in line.

Rose began the final day three back of Watson, who blistered the TPC Blue Monster at Doral Resort with rounds of 70-62-67 to open the tourney. But Bubba’s early stumbles – three consecutive bogeys (holes 3-5) and another on No. 9 – allowed Rose and others back in it. Rose played solidly in the steady winds buffeting the course, reaching 17-under with a birdie on No. 14.

McIlroy made a spirited Sunday charge after starting the day eight shots behind. Coming off a Saturday 65, McIlroy climbed quickly with four birdies in his first 10 holes. He then jarred a bunker shot for eagle on the par-5 12th and was suddenly just a shot off the lead. But bogeys on 14 and 18, with a birdie on 16 in between, did him in.

Watson, left for dead after an outward 39, staged a mini-rally of his own with birdies on 11 and 12. He stalled with a bogey on 13, but had a chance to tie Rose after a sensational approach from the trees left him 9 feet from birdie on 18. The big left-hander’s putt slid past, however, and Rose was the winner.

Grasping the event’s elegant Wedgwood trophy, Rose said, “For this little beauty to show up on my mantle place so early in the season, definitely a fantastic feeling. It sets up a very exciting year.”

This week: The PGA Tour moves to Tampa, Florida, for the Transitions Championship, where Gary Woodland defends. The European Tour resumes play after a month-long hiatus, visiting Spain for the Open de Andalucia. Paul Lawrie returns looking to repeat his 2011 victory in the event.