Rafael Cabrera-Bello upstaged Lee Westwood to win the Omega Dubai Desert Classic, closing with a 68 to beat Westwood and Stephen Gallacher by a stroke. 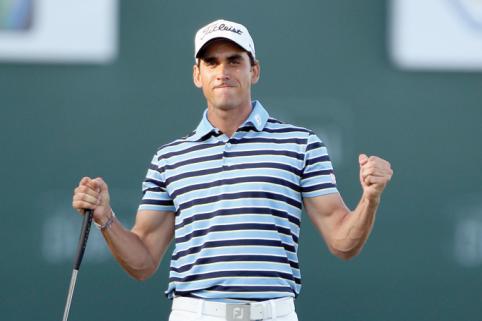 The victory was Cabrera-Bello’s second overall and first since 2009. And Westwood wasn’t the only star he knocked off en route to the title. Rory McIlroy entered as a 4/1 favorite and opened with rounds of 65-66, but slipped at the weekend to tie for fifth. In fact, Westwood jumped McIlroy into second on the world rankings, McIlroy sliding to third.

Westwood appeared headed for his first victory of 2012 after three rounds, especially when he opened a two-shot lead with an eagle 2 on the par-4 second hole. His play was middling from that point on, however, as Westwood managed just one birdie against one bogey over the final 16 holes and settled for a 70. Gallacher fared better on the back nine, with an eagle and a birdie to challenge Cabrera-Bello.

The Spaniard, though, was up to the task. Three birdies on the homeward half sealed a 4-under 68 and 18-under-par total, earning him €315,532. He also climbed into the world’s top 60 to qualify for the 64-man WGC-Accenture Match Play Championships in the U.S. later this month.

The European Tour travels to India for this week’s Avantha Masters, where Joost Luiten (16/1), Gregory Havret (18/1) and Jamie Donaldson (20/1) are the early favorites according to SkyBet.