Stanley bounces back to win in Phoenix Cabrera-Bello turns back Westwood, Rory for Dubai victory 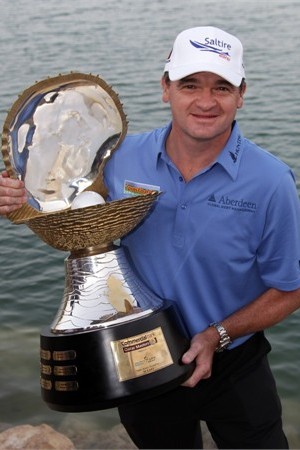 Lawrie previously won in Qatar in 1999, the same year he claimed the Claret Jug as Open Champion. His latest victory was an emotional one, coming just months after the death of his longtime coach, Adam Hunter, from leukemia. Lawrie also surged back into the world’s top 50 after falling all the way to 272nd just last year.

“I don’t think I can play much better than that,” said Lawrie, who chipped in twice in the final round and finished on -15 for the week. The tournament was reduced to 54 holes due to heavy rains. “You’ve got to go back to basics (when leading) and I did that. I hit some nice shots coming in.”

Though Lawrie ended with a comfortable cushion, the round wasn’t without challenges. Sergio Garcia was -6 through 11 holes and tied Lawrie’s lead, but Lawrie chipped in for eagle on the ninth. His second chip-in, on the 17th, iced the cake.

American John Daly enjoyed his best effort in ages, finishing solo fourth on -9. Garcia fell back into a four-way tie for fifth.

Next stop for the European Tour is this week’s Omega Dubai Desert Classic. Rory McIlroy, who claimed his first professional victory there in 2009, leads a field featuring Lawrie, Lee Westwood and Martin Kaymer.