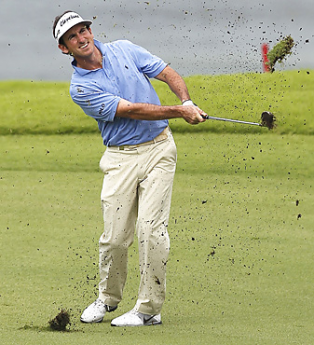 His back troubles finally behind him, Spain’s Gonzalo Fernandez-Castano charged to a playoff win over Juvic Pagunsan at the Barclays Singapore Open.

The victory capped a run of great form for Fernandez-Castano and put to rest doubts about his health. An early-season back injury caused three consecutive missed cuts followed by a six-week hiatus; he’d earned less than €50,000 by the end of September.

A solid stretch in his home country included second, sixth and 12th-place showings in October, setting the stage for Fernandez-Castano to break through in Singapore. Tied with Pagunsan on 14-under through 54 holes (the event was shortened by rain), Fernandez-Castano won with a birdie on the second hole of sudden death.

Getting to extra holes wasn’t easy for Fernandez-Castano, who squandered a four-shot lead on the final nine with three bogeys in a four-hole stretch. Victory came as a welcome relief. “It has been a tough year and I got a monkey off my back,” he said. “I just wanted to come back from my injury and play well again.”

The win was Fernandez-Castano’s fifth on the European Tour and first since the 2008 British Masters. The €720,877 winner’s check pushed him over €1 million for the second time in his career.

American star Anthony Kim and 2010 Open champion Luis Oosthuizen fell one shot shy of the playoff on -13. Danny Lee, Joost Luiten and Edoardo Molinari were another stroke behind.

The Tour’s next stop is South Africa, where Leopard Creek GC hosts the Alfred Dunhill Championship.