Stanley bounces back to win in Phoenix 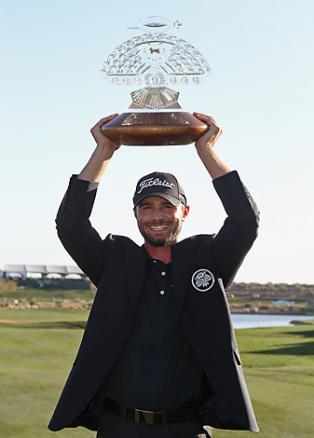 Some golfers shake off heartbreak better than others. Kyle Stanley proved his resiliency with a shocking, come-from-behind win at the Waste Management Phoenix Open just one week after a last-hole collapse cost him dearly in San Diego.

Stanley began Sunday’s final round eight shots off the pace set by Spencer Levin, who was six clear of the field. While Levin struggled to a messy 75 (4-over par), Stanley cruised to a steady 65 and 15-under total. Levin and Ben Crane had their chances on the closing holes, but neither could cash in. Stanley drained a testy 4-footer to par the 72nd hole, finishing one ahead of Crane and two up on Levin.

It was a stunning turnaround for Stanley. The week prior, he led by three teeing off on the 72nd hole at the Farmers Insurance Open, then made triple-bogey eight to fall into a playoff with Brandt Snedeker. Snedeker won on the second hole of sudden death.

“You go from a very low point to a high point,” Stanley, 24, said after his Phoenix triumph. “I’m not sure I expected to maybe recover this quickly. I think the biggest challenge was seeing if I could put last week behind me. I think I did.” Stanley earned $1,098,000 and tops the Tour’s money list.

Levin, seeking his first Tour victory, suffered his own Sunday meltdown. The final blow came at the par-5 15th, where a shot into the water led to a double-bogey 7.

The Tour returns to California this week for the AT&T Pebble Beach National Pro-Am, where Tiger Woods makes his 2012 U.S. debut.