Just when Justin Rose’s Sunday stroll to the BMW Championship got a little rocky, the Englishman chipped in for birdie on the 71st hole to seal his third PGA Tour victory. 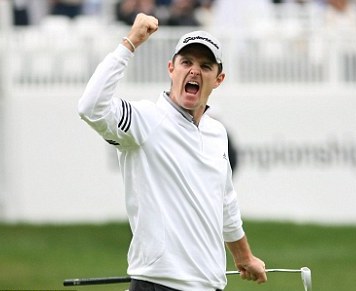 Rose opened with an 8-under-par 63 on Thursday and opened a five-shot lead with 10 to play in the final round at Cog Hill Golf Club outside Chicago. A bogey on the par-5 15th, however, left him just one clear of playing partner John Senden. Rose came up short of the green on 17, further dimming his prospects.

But his delicate chip toppled into the hole, giving Rose the cushion he needed to finish off the field. A standard par on 18 gave Rose a 13-under total and a hard-earned victory – plus a great shot at winning the FedEx Cup, and its $10 million bonus, when the playoff series concludes this week in Atlanta.

“You know, I practice closing,” said Rose, who had frittered away 54-hole leads six times before. “It does come down to one moment sometimes, and you just need to be ready for it.”