Johnson Wagner outlasted a host of contenders to win the Sony Open in Hawaii, earning a two-shot victory with a closing 67 in windy conditions. 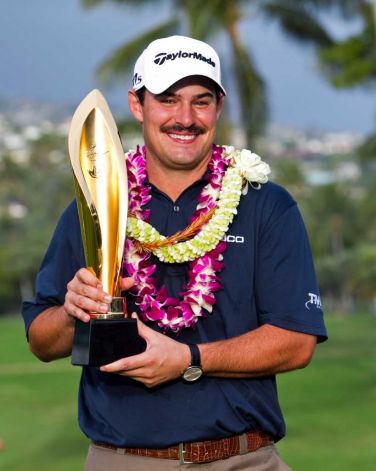 Sporting a new mustache and a slimmer build, Wagner entered 2012 with higher confidence than in the past. The newfound swagger was evident Sunday at Waialae Country Club, where Wagner was one of six players to hold at least a share of the final-round lead. The three-time PGA Tour winner took over the top spot with a birdie on No. 10, dropping another birdie on 15 for a two-shot margin he never relinquished.

Wagner finished 13-under par for the week, while Carl Pettersson, Harrison Frazar, Sean O’Hair and Charles Howell III tied second on -11. Third-round leader Matt Every – who served a three-month suspension after a drug arrest in 2010 – struggled to a final-round 72 and was among those tied at -10.

After shedding 20 pounds and letting his mustache fill in during the offseason, Wagner sensed a change coming. “I was definitely telling people to expect something early this year, which is a nice feeling,” said Wagner, who claimed $900,000 for the victory. “Usually, my confidence is low. And for some reason, I just had way more energy and confidence going into this year.”

The Tour heads for the mainland for this week’s Humana Challenge in Palm Springs, Calif. Formerly known as the Bob Hope, the Humana is expected to attract its strongest field in years with Phil Mickelson, Dustin Johnson and Matt Kuchar among those committed to playing.